What Everyone Ought To Know About Tattoo 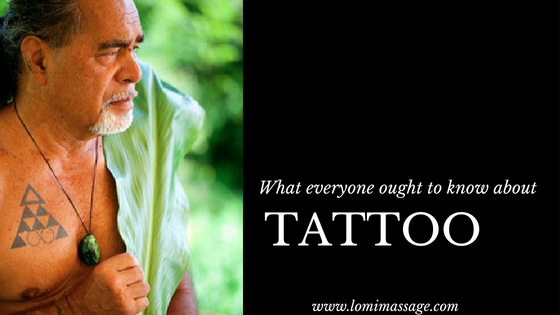 “Tattoo can be a permanent reminder of a temporary feeling,” – Jimmy Buffet

The traditional tattoo ceremony, tatau, is called kakau in Hawaiian language. In ancient Hawaii, tattoo was a rite of passage. Ritual ceremony performed at certain times in one’s life and journey.

Everybody ought to know tattoo is more than a body marking.

Tattoo would tell the story. Generational stories of trade, like a healer or a fisherman. Family Stories. Districts or moku one belonged to based on marking.

By wearing these certain marks you would be carrying the genealogy and the history of your family. Sometimes, those stories could be very heavy.

Auntie Mahi, one of my kumu, was a master genealogist. She told me our Naluai women never got tattooed. Their responsibility was to care for the children of the chiefs, the ali’i. The reasoning: if they were tattooed, the entity or the image of the tattoo could jump onto the child and put the child in danger.

I got the tattoo to commemorate a rite of passage. I had just completed my advanced Lomi training at Auntie Margaret’s house on Big Island.  While I was there, I had an experience swimming with the dolphin at Napupu.  For me, the tattoo told my Lomi Lomi story.

Auntie Mahi looked at my tattoo, pointed to the male dolphin and said, “This one is a trickster,”

I said, “Auntie, I didn’t know that we weren’t supposed to tattoo.” I mean, obviously we’re not taking care of the ali’i children anymore. But she said, “That’s okay, baby. Auntie is going to help you.”

This tattoo you have of the and where you have it on your body, you’re going to have a challenge opening up the womb and when it comes time for the womb to open. But don’t worry, Auntie will help you.”

When I was giving birth to my son,Kala , I had this big plan of having a water birth at home. After 40 hours of labor, my midwife told me I needed to go to the hospital.  I got in the car to the hospital and the whole time I’m thinking, “Auntie, you told me that you were going to help me,”

The whole time, the womb wouldn’t open. I went from eight and a half centimeters and my cervix was closing to five centimeters by the time I got to the hospital.

Then I realized, “Ah, I had to wait until I got to the hospital for you to help me.”  I really felt her there in those moments and I gave birth to a beautiful, healthy baby boy.  Since then, I’ve had three more children.  Thank you Auntie!

Recently, I had a client complaining of pain in his forearm.  Right away, I notice he is heavily tattooed on his forearms.  There was a thick black band that went all the way around. No opening. No flow.

As I was working on him, I asked how it happened that his arm was hurting. He was a landscaper does a lot of pulling lifting. I know that if something’s manifesting physically, generally there is a spiritual component as well.

When I asked about the black band tattoo, he shared it was a cover up. “Well, what did you cover up?” I asked.

“Oh, it was a symbol I got at the same time with girlfriend, now ex-girlfriend.  After we broke up, and I married my wife, she would make a lot of jabbing jealous comments towards it.  I just covered up to stop hearing those comments.

Since that time, I’ve divorced and just had a series of short, kind of turbulent relationships.  I really want to clear this up.” I made some suggestions about ways to open that tattoo up and create more flow.

He also had was an arrow that was only pointing one direction. The forearms are about giving or sometimes over-giving.  Forearms are about what we’re willing to let go of and asking for support.

He said that really resonated with what he had going on. The last thing he asked me before he left was, “Do you know a good tattoo artist?”

Sometimes people have tattoos as a shrine to their suffering, sorrow and pain. Just as our thoughts carry energy, ink markings also carry energy. Images are just the same as writing it out, giving energy and mana to the story.

Use your tattoo to tell a positive story.

I have a friend who had surgery and the scars were really visible underneath her breast area.  After her husband died, she was really embarrassed to have to explain to new partners where they came from. Also the relationship she had been in had been very, very challenging, especially in the last days of care-taking. She was wondering how to open her heart again.

She chose tattoos of beautiful giant open lotus blossoms. They held up her heart and her breast areas. For her, it was a way of putting on an energy towards heart opening for the next love of her life and also a way of covering up these scars underneath. A symbol of another initiation on her journey.

Aunty Mahi did a ceremony over tattoo when clients would come into our clinic. Prayers for cleansing and healing. Prayers for empowerment over the area.  She used frankincense oil. It’s sacred oil, for clearing and cleaning.  I continue this practice today with my clients and so can you.

Thoughts. Words. Pictures. Tattoo.  Our way of identifying, carrying our family histories.  Take the opportunity to clear, cleanse and shed some positivity. Put some energy and mana towards healing our experiences and those of our ancestors as well.

Be intentional. The stories you place on your body are being put out into the world.  Tattoos can be a reminder of where we’ve been and how far we’ve come.

If you have stories to share or questions about ancient ink, we’d love to hear from you.

You will also enjoy reading: Signs in the Heavens  | Find Wisdom in Nature Programs you will enjoy: Elements of Hawaiian Healing  |  Lomi Lomi Fall 2019 Mastership

1 thought on “What Everybody Ought to Know About Tattoo”