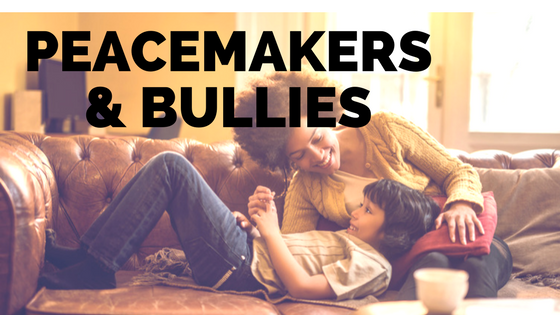 My son has been having some trouble on the bus with some other kids from school.  They said some mean things.  He told me he was getting bullied.

When I asked my other kids what happened, they told me it was La’au who was doing things that the other kids didn’t like.  Things like staring at them.  Putting his hand on their head if they were sitting in front of him. When they asked him to stop, he thought it was funny.  He just kept doing it.

They got upset. Things were said.  Everybody feels hurt.

Anytime we force our will on others when they’re saying to stop, it’s a form of bullying.

We might think it’s funny.  To us, it seems benign.  We don’t think its hurtful to somebody else.  But actually, it’s bullying.

I shared this in a heart-felt conversation with my boy.  I could tell just by his facial expression and by his body language, he had never thought about that before.  He was really upset to think of himself as a bully. He really didn’t see himself that way.

I talked to him about how he can shine the light of who he really is.  I can see that God has put him in the middle between his older brother and his younger sisters in order to be a peacemaker.

It reminded me of my beautiful brother-in-law Tim Bresenden.

He was the peacemaker in his own family. He had a family of nine brother and sisters. They were Russian immigrants who came to the States at a time when it wasn’t very popular to be Russian. “Red Commie”, as in communist, was a name he heard often.

He was bullied, but he decided he never wanted anyone else to feel that way.

If there were any disharmonies between his siblings, he would be the one to help to keep the peace.  He enjoyed helping people to get along. He had a special way about him, speaking to the different parties that were involved with the conflict. They worked together to find ways to take responsibility for what each had done and eventually come back together.

As he went on to school, he noticed kids left out, or picked last for games. He made friends with the outcasts, because he remembered being the outcast.

As he went on in his life, he became a peacemaker at work. He worked for a large Fortune 100 company,  working his way up from the mail room to senior management. At one point, his job was to help employees within the company who were disgruntled, find their passion.

He was able, in his special way, to find the underlying problem.  Was it really that they were unhappy with the company? Or maybe they weren’t passionate about the position in the company they held at the moment? Did they need to find their passion?  He would then take all this information and try to place them within in the company.  Find them a place where they could really thrive. He had a gift.

After a time, he started thinking about what it might look like to “love your neighbor”.  He lived in a beautiful house in an affluent neighborhood.  One day, he noticed some migrant workers walking down a path across the street from his home into a canyon.  He decided to take a look and found little shanty cardboard box homes and tents there.

He decided to go down to his “neighbors” make-shift camp with a six pack of beer, and hung out with these migrant workers.  He didn’t speak any Spanish.  They didn’t speak any English, but they became friends.

Tim used to go surfing.  On occasion, he would sit on the beach with his $5 Starbucks and morning bagel watching the waves come in.  One day, he noticed there were some homeless people rummaging in the trashcan for their next meal. He thought, “Wow, you know, it would be really nice if these people could have a breakfast to wake up to.”

So he started going to Starbucks and instead of getting his usual one cup he would get a whole carafe of coffee. And a whole dozen bagels.  He’d bring it down to the beach and sit and have breakfast and talk story with his homeless friends there.

Tim found a brain tumor in 2005 and after a five year fight with cancer passed away in 2010. When we went out on the ocean to spread his ashes, we went to that same beach where he used to go surfing. We decided to paddle out with our friends and memories to say goodbye.

When we went out with the surfboards, his homeless friends asked if we would paddle them out with us. One man didn’t even have his own shoes.  He didn’t have the strength to paddle out. So we paddled him out there so he could pay his respects to his dear friend.

Tim Bresenden was a peacemaker.

I shared this story with my son because I wanted him to realize a legacy that he could continue to carry on within our own family.  I wanted him to see himself as a peacemaker in our family.  Not the fight-starter.  Not the one doing something that others don’t like.

His true light that he needs to shine is the peacemaker. He has an opportunity to show people who he really is, in his true essence.

Since that time, he’s been sharing with me and telling others…

I’ve seen a huge shift in his behavior towards others.

Once a year, we offer the Tim Bresenden Memorial Scholarship. This scholarship is a full week of training: Lomi Lomi Fundamentals and Lomi ‘Ili ‘Ili Hot Stone therapy, lodging and airfare.

We honor Tim Bresenden, who believed that one kind gesture, passed forward, can change someone’e life.  Can change a whole community.

This is your personal invitation.

If you feel called to learn Lomi Lomi, submit a letter (250 words or less) or a video (2 minutes) of how you would use the teachings of Lomi Lomi to serve your community and pay it forward.

Bring healing and Aloha to your life, your community, your clients!

Send all Scholarship submissions to classes@lomimassage.com .  Deadline is June 1, 2017.  Winner will be announced July 1, 2017.

Can’t wait to hear from you!

6 thoughts on “Peacemakers and Bullies”

Welcome to the Winter Solstice Spa Celebration on DECEMBER 21. Check your email for confirmation.